Dangerous goods are substances and items containing substances which, due to their nature, properties or condition, may, during transport, present a risk to public safety or order,, in particular to the general public, important public goods, the life and health of humans, animals and other property, and which are to be classified as dangerous goods under legal provisions.

The legislation regulating the transport of these dangerous goods is not part of the REACH and CLP regulations, but is found in the so-called ADR. The abbreviation stands for “Agreement concerning the International Carriage of Dangerous Goods by Road”. The agreement was first signed in 1957 and now has 52 contracting parties. Annexes A and B of the ADR are updated every two years according to the latest scientific findings to reflect the latest technical and legal developments.

The ADR, consisting of the agreement itself and Annexes A and B, comprises a total of nine parts which regulate the international transport of dangerous goods. They define, among other things, the conditions under which transport may take place, as well as the requirements for vehicles, packaging, containers, labelling and documentation.

Find below the pictograms used in the context of ADR: 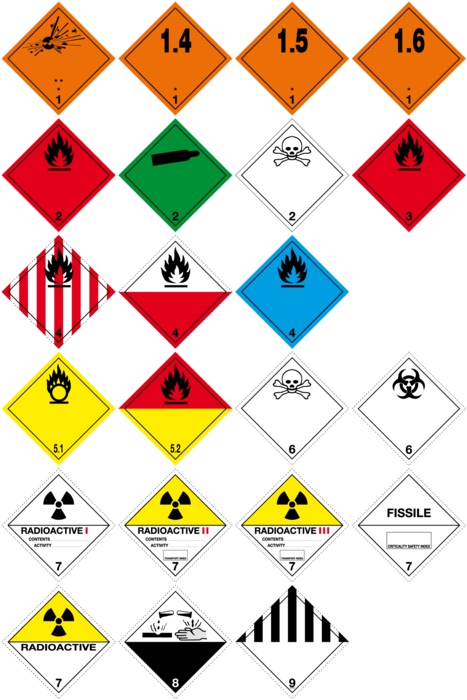 Where appropriate, dangerous goods must be marked, inter alia:

On the orange, rectangular warning label there are usually two numerical codes, one below the other, which provide information about the type of danger (upper number = hazard number) and the type of goods being transported (lower number = UN number).

The key part for the use of ADR is Table A of Chapter 3.2, which contains the list of dangerous goods according to the UN numbers. Once the number of a particular dangerous substance or article has been determined, the table indicates, by cross-reference, the special requirements which apply to the carriage of that substance or article, and the chapters or sections in which the requirements in question appear. However, in addition to these special requirements, the general requirements or the requirements specific to a given class found in the various parts of the ADR also remain applicable. In addition to the labelling of packages and transport units, a transport document and written instructions are also required. In addition, vehicles, all containers, packages and tanks may be subject to specific regulations regarding construction, testing and approval.

Before transporting dangerous goods, however, it must be checked whether one of the possible (partial) exemptions from the overall ADR applicability rules and requirements (e.g. 1.1.3; 1.7.1.4; 3.3; 3.4 and 3.5) can be considered.

Requirements for concerned parties in the transport of dangerous goods

Drivers of vehicles carrying dangerous goods must be in possession of an ADR driver training certificate. The drivers concerned acquire this certificate through training courses, which serves as proof to the control authorities that the driver is authorised to drive a dangerous goods vehicle and that he has the necessary knowledge. In addition, any person involved in the transport of dangerous goods by road must have received training in accordance with Chapter 1.3 of the ADR on the provisions applicable to the transport of such goods, in accordance with his responsibilities and duties.

Each member of the vehicle crew must have personal protective equipment. In most cases, this includes eye protection (such as safety goggles), at least one pair of protective gloves, a portable lighting device and a high-visibility waistcoat.

ADR equivalents for other transport modes

The counterparts of ADR for the other modes of transport are called:

Article 4 of the amended law of 24 December 1999 on dangerous goods safety advisers for the transport of dangerous goods by road, rail or inland waterways, which states (translated from French law text): "No one may, either principally or incidentally, carry on in Luxembourg the activity of safety adviser for the transport of dangerous goods by road, rail or inland waterway without prior written authorisation, where this activity is carried on in a self-employed capacity on behalf of third parties. The authorisation in question is granted only to persons who provide the necessary guarantees of good repute and professional qualification. It shall be issued in accordance with the conditions and in the forms laid down in Title I of the Law of 28 December 1988 1° regulating access to the professions of craftsman, trader, industrialist and certain liberal professions; 2° amending Article 4 of the Law of 2 July 1935 regulating the conditions for obtaining the title and certificate of mastery in the exercise of trades. Good repute is assessed on the basis of the applicant's criminal record and all the elements provided by the administrative enquiry. The professional qualification of the person who has applied for authorisation to exercise the activity of safety adviser is established by the training certificate he or she must hold. The training certificate is issued by the Minister after the person concerned has passed an examination. The terms and conditions for the establishment and validity of this certificate are laid down by Grand-Ducal regulation ".

In other words, this means that in Luxembourg, only persons who hold the "Dangerous Goods Safety Adviser Training Certificate" and meet at least one of the conditions listed below may be appointed as a dangerous goods safety adviser:

The competent service of the Ministry of Mobility and Public Works can be reached at: